Sandeman popped my sherry cherry. On a recent trip to Spain, I ventured to Jerez and stumbled across the Sandeman Bodega located right next door to the Royal Andalusian School of Equestrian Art. Convenience plus five.  Two major tourist attractions in one go.  As it turned out, Sandeman was the perfect bodega for a novice sherry drinker to visit.

Sandeman offers tours in English and our guide was adorable. This young lady was dressed in the official Sandeman outfit, resembling a 19th century spy with her cape and dark caballero hat. Since the temperature in Jerez was roughly 100 F in the shade, the entire tour group felt a strong measure of sympathy for her plight.

The Sandeman Bodega tour is very interesting with guides explaining production processes, harvesting, grape types, and so on. A broad overview of sherry wine is given as well as specific information relative to Sandeman. Southern Spain sherry producers all follow a production method called the Solera system. Barrels are stacked based on their age. The oldest vintages go on the bottom, the second to oldest on top of that, etc. When it comes time to bottle the sherry, a bodega will take one third from a barrel/row and then recoup the amount taken with the next youngest row. Basically, you can never have a true vintage for sherry. Producers will end up with a sherry that is around 20 years old, but the blending process ensures that there will never be a sherry dated with a specific year. In other words, consumers cannot get a sherry from 1995 harvest. Although it muddles vintages, the Solera method does allow for consistency. Each sherry from a given classification always tastes the same. This means that there is more of a focus on the production process and styles specific to individual bodegas rather than an emphasis on the qualities inherent to the grape. Apparently the grapes used to produce the sherries can be fairly bland on their own and require finessing.

Sherry wines are fortified with alcohol produced from distilled wine grapes. Adding in this alcohol cuts short the natural fermentation process and allows producers to create a specific flavor profile for different sherry varieties. Fortification also ensures that sherry will not spoil, or go bad. Given the extreme temperatures in the Jerez region, this makes sense. Jerez is also close to the port town of Cadiz and sherry was frequently supplied for long voyages at sea. Fortifying the wine meant that it would stand up to the extreme changes in temperature and motion found in sea voyage.

Sandeman’s iconic logo was created as a marketing ploy in the early 20th century. The ploy worked and Sandeman products are extremely recognizable worldwide. 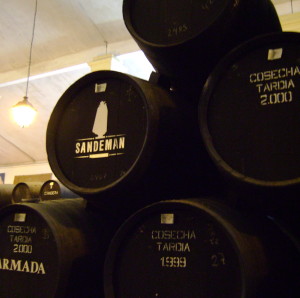 Sandeman offers a variety of tasting levels to complete your tour. I chose the basic sherry tasting with food. 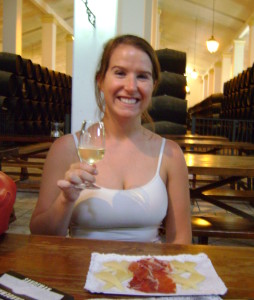 Nothing like some fortified wine during your first meal of the day!

Along with the informational tour, Sandeman also features dioramas in barrels 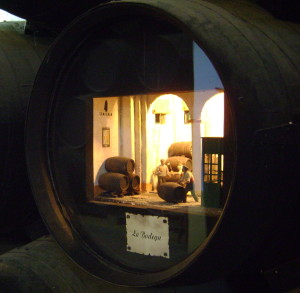 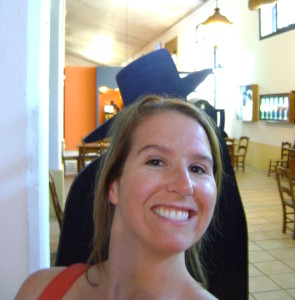 And a beautiful courtyard which can be rented for events 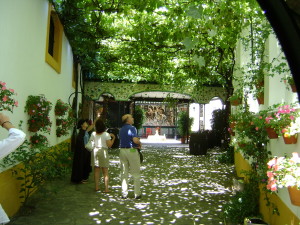 Complete with a ceiling of grapes.

While I do not have a basis for comparison, I thoroughly enjoyed my Sandeman bodega tour and highly recommend it. It’s centrally located, informative, and fun!

The Sandeman Bodega turned me into a sherry convert and inspired my loyalty to the company.  Having tried several other brands, I still prefer Sandeman’s “Character” (medium-dry) sherry, although the Garrocha Amontillado is a delightful equivalent.  Sandeman’s medium-dry sherry is delicious. Not overly sweet, it has a delightful nutty flavor that would allow it pair well with game dishes or aged cheeses.  The Fino or dry sherry is not my favorite, but I can understand how it would complement fresh seafood – think oysters.  Armada Cream sherry is perfect for dessert, with a thicker, more viscous mouth feel, and will pair exceptionally well with a salty gorgonzola to contrast with the sweetness of the beverage. Like a good scotch, Sandeman’s aged Amontillado sherry is perfect for a cold winter night curled up in front of the fire. The intense oaky and tannic flavor ensures that Amontillado is savored rather than vigorously quaffed. I recommend that novices move on to this sherry after introducing their palate to the more user friendly varietals.