Herve This – “Note by Note” Lecture

Herve This, a founder of molecular gastronomy, recently spoke at Boston University as part of the Jacques Pepin lecture series promoted through the Metropolitan College Food and Wine Studies program. This was there to promote his new book, Note by Note Cooking. At 6’2” with his white hair, piercing blue eyes, lanky build, and ebullient French accent, This cuts quite the figure. 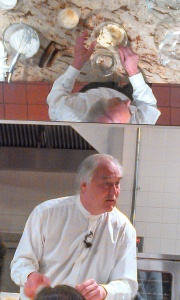 Monsieur This preparing a protein powder meal… reflected in the cooking demo mirror.

Despite his culinary associations, This is not a chef, but a chemist on staff at the Institut National de la recherché Agronomique in Paris. This is the author of several books, other than Note by Note, and holds the honor of discovering why a soufflé expands (in short, evaporating water). (hyperlink)

This’ lecture primarily consisted of a demonstration. Using a protein powder made from egg whites, water, oil, and pure flavor compounds This created everything from sauce to steak. To make a fake steak, you need egg white powder, water, oil, flavor compounds and either a comb or fork. Roughly 60 percent protein and 40 percent water – whisked with a drizzle of oil can compose the base of your “steak”. Adding flavors of black pepper and bacon will make this concoction taste pretty good. To give the “steak” texture, cool the liquid on some type of hard plastic before frying, and drag either a fork or (clean) comb across the concoction before frying in a non-stick pan. Voila! You have a steak?

Throughout This’ lecture, he reiterated the difference between molecular cooking and molecular gastronomy. Basically, cooking and gastronomy are different things. This believes that with our emphasis on celebrity chefs, society frequently elevates the chef to the rank of the scientist. Molecular gastronomy entails looking for the scientific reasons behind the phenomena of taste and understanding the chemistry involved. Cooking, molecular or otherwise, is exactly that: Cooking. While this distinction is a bit harsh to the chefs and cooks, it does raise interesting points about a lack of authority in the field of molecular gastronomy in the United States (France is ahead of us on this one). 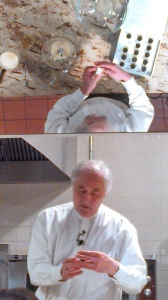 Herve This examining his flavor compounds

While I have yet to read the book, Note by Note, This did come across as a bit… evangelical. He promotes modifying our diets to primarily subsist on protein powder based meals. True, you know exactly what you are eating; and with practice you may be able to create convincing flavor profiles. I’m not exactly sold on the idea though. I’ll get back to you guys after I’ve read the book, and maybe test driven a few recipes….

Tagged Herve This, Note by Note. Bookmark the permalink.