One of the best parts of going to graduate school for gastronomy is all the interesting and talented people that you get to meet through the program.  Case in point, I had the pleasure of meeting Nawal Nasrallah Monday night in my History of Food class.  Nasrallah is an intelligent, funny, and delightful lady who also happens to be an exceptional historian and cook.  She was speaking to our class about her work translating a medieval Baghdad manuscript from Arabic into English.  Dated at the 12th century, there are three surviving copies of Kitab al-Tabikh.  Nasrallah was able to access all three copies, which she used for clarification on finer points of her translation Annals of the Caliphs’ Kitchens.  This work is very interesting, and describes preparation methods and hygienic standards as well as recipes from this time period.

We were lucky to have Nasrallah prepare several medieval dishes for us to sample in class.  This food was amazing!  Two dishes stood out as absolutely phenomenal though.  One was a dressed eggplant dish.  The eggplant was soft and mushy – in a pleasant way – with a topping composed of caramelized onion, pomegranate syrup, spices, and nuts.  The spiced topping paired very well with the taste of the eggplant and was symphony of unique and potent flavors.

Nasrallah’s chicken course was my next favorite menu item.  She served us shredded rotisserie chicken mixed with a sweet and sour sauce, black olives, and mint.  The chicken was tender and moist while the sauce was perfectly balanced – it’s mild sweetness offset by a pleasant tang.  Adding salty olives and fresh mint helped to round out all the flavors, complementing the sauce and adding another dimension to the dish.

Unfortunately, as this occurred during class, I do not have pictures.  However, I am planning to buy Nasrallah’s Delights from the Garden of Eden cookbook and will attempt to recreate the recipes had in class.  Once I have successfully done so, there will be a follow up post with pictures sharing my adventures recreating Arab foods.

One of the most interesting things about the food we ate is that it follows the Galenic theory of the humors and dietetics, prevalent throughout the world during the Middle Ages.  This humoral theory informed cooking during the Middle Ages and posited that the Universe (and human body) was divided into four elements which all had different properties.  Air was hot and moist, fire was hot and dry, water was cold and moist, and earth was cold and dry.  Different individuals may have a different bodily states attributed to them – cool and moist vs hot and dry.  The goal of the humors was to find a balance, often achieved through eating foods with certain supposed properties.  For example, if you had a cold, perhaps you were too cold and moist therefore you would eat a hot and dry food – like ground cinnamon – to balance yourself out.  The intersection between medicine and the humors was very common during the middle ages but fairly ineffective for treatment purposes. 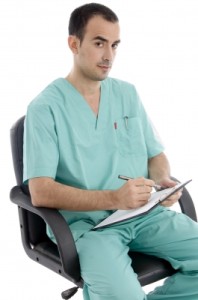 A touch of the plague, you say? Some nutmeg ought to fix that right up!

All the foods served in our class were well balanced.  The spices used were meant to even out the properties of the meat or vegetable and vice versa.  While on paper the humoral system seems a little weird, in cooking it’s a great idea.  Balancing the flavors in a dish is something that all chefs strive for.  The medieval Arabic approach to cooking achieves that balance, but also introduces some very interesting flavor combinations due to Galenic beliefs.  The food was absolutely fantastic.  While I can see why belief in the humors died out as a primary medical practice, I have no idea why we do not still cook this way.