Lisbon is a beautiful, hilly city. Seriously, so many hills. 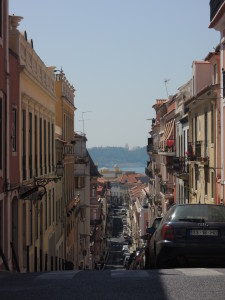 While walking everywhere will give you legs of steel, the metro system is another alternative. On a recent vacation, I stayed in Lisbon and took day trips to both Sintra and the Belem area outside of Lisbon. If you plan on staying in the Lisbon area for any length of time, I strongly recommend getting a re-loadable metro card. These cards are used for the metro, the buses, and the local trains.  They are called Via Vivagem cards with Zapping.  Zapping seems be mean re-loadable and gets you a discounted price on your fare (1,25 Euro vs 1,40 Euro). 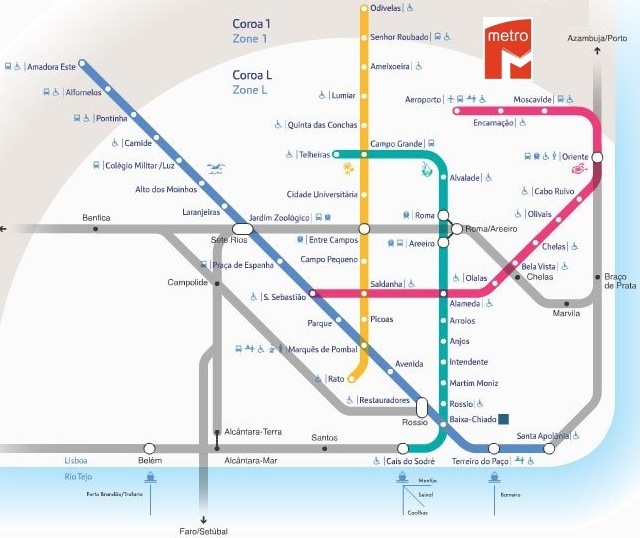 Most tourist maps include metro stops and it is highly likely that your hotel will be near one. The metro is clean, punctual, and safe. It is an excellent and easy way to get around the city.

Notic the gray lines on the map? Those are local trains. The trains connect to/at subway stations, however the trains are a different price around 2,15 Euros rather than the 1,25 Euros for a metro journey. The metro card will also work for the trains, just make sure you have enough cash on it. I took the train from Entrecampos station to Sintra and back during a weekday. From Lisbon to Sintra took about 36 minutes. It was about the same amount of time for the return train ride. During the weekdays the trains run frequently. Less so on the weekends. Double check departure and return times on the pdf timetable located on the Comboios de Portugal site.  If you click under Lisbon Urban Services you can download the correct train timetable. Belem is located in the Cascais table and Sintra is marked as its own. When you are looking at the Sintra table, note that the different colors correlate with the appropriate metro stop. Yellow times are for Entrecampos, Blue for Rossio, etc. Best bet? Ask an attendant at the train station. Everyone I encountered in Portugal spoke some English and it was very easy to communicate.

What to skip?  The tram. For some reason, everyone raves about the tram. After a week in Lisbon, I still don’t understand why. The metro system can take you anywhere you need to go in downtown Lisbon. The local trains easily make up for areas outside of the metro. I took the tram from Lisbon to Belem and promptly decided to take the train back. The trams are crowded, poorly ventilated, notorious for attracting pickpockets, and drive on the streets so they have to obey traffic laws and brake for lights. Don’t bother.

Taxis are abundant in Lisbon and reasonably priced. However since the metro is even cheaper and very easy to use, I only took taxis to and from the airport. The only other time you may want to use a taxi is if you go clubbing. The metro does close at 1AM so if you’re out after that time it’s either a taxi or walking.