That time I went to a Nubian Goat Show

I love fairs and agricultural events, and I’m getting really excited about hitting up the Topsfield Fair this weekend! I’ve been before and it was pretty rad. Don’t worry, I will be posting about it next week. Today’s post is actually about one of those times that an event isn’t quite as fantastic as you think it might be.

Goats are awesome. They’re incredibly adorable and, for some reason, frequently associated with the Devil. Yeah – that’s a little weird, but some goats faint as a defense mechanism! How can you not love that!? Also, their milk makes for incredibly delicious cheese.

Given my enthusiasm for all things goat-related, you can be sure that I was super stoked when I saw the advertisement for a Nubian Goat Show back in 2011. I immediately cancelled all prior engagements, and invited my nearest and dearest. Strangely enough, no one seemed interested. I was envisioning a crazy stunt show with highly trained African goats jumping through flaming hoops, performing gymnastics, maybe even creating goat pyramids. I was basically imagining the cast of Bring it On, but with fur and cloven hooves. 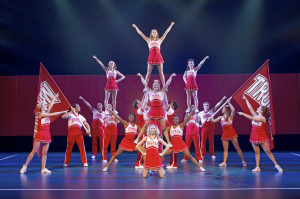 After assuring everyone that they were “totally missing out on epic awesomeness,” I made the hour plus drive to the Lancaster fairgrounds. I expected Cirque de Soleil. What I got was a dilapidated shed in the middle of giant field, filled with 35 goats and ten people. No flaming hoops or goat gymnastics. Needless to say, the pyramid was also a bust.

Although my dreams were shattered, I forged ahead. After driving over an hour to the middle of nowhere, I was going to see some freakin’ goats. I sauntered over to the shed area and pretended to fit in. Unfortunately, my ruse fell flat. It’s hard to hide in a crowd when you are one of eleven people.

A nice woman meandered over and inquired if any of the goats belonged to me. For some inexplicable reason, I responded by saying, “Nope. I just really like goats.” “I see…” said the woman, as she edged away. It dawned on me that maybe she interpreted my response to mean that I really liked goats. After briefly debating the merits of chasing after a stranger and assuring them that I did not partake in bestiality, I took this as a sign and called it a day.

And that was the Nubian Goat Show of doom; an event where my expectations were infinitely cooler than what reality had to offer. Luckily, the Topsfield Fair will be badass. They probably won’t have flaming hoops, but I know for a fact that they have a pig race and chickens with fuzzy feet. And yes, the fair also has goats.

You cannot escape me…. I am far too adorable.